It was Easter long weekend. I had been living in Darwin for about a month, but I couldn’t stay away from the Gulf. I spent the long weekend at King Ash Bay Fishing Club and managed to squeeze in a fishing trip with some mates. It would have to be up there with one of my favourite days on the water ever.

The day started at sunrise, as usual. But in this case, we were all up bright an early to actually see it! 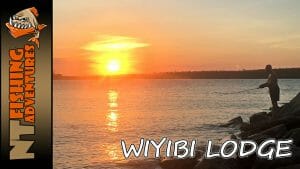 We loaded the boat up with a heap of gear and eskys packed full. Our first stop was Wiyibi Fishing and Wilderness Lodge on North Island. Our only reason to go there was just to go and say g’day to our mate Brett. It is just a magnificent part of the world at Wiyibi, so picturesque. We had a few beers with Brett and then headed off on our way.

The next stop was Paradice Bay, which was for a search and recovery mission. We had heard a story about some blokes that had left some fishing rods on the beach there. So we went exploring looking for that. Did we find the fishing gear? Watch the video to find out…

It was then time for some fishing. It was a top day with several really good fish landed. Including some big Golden Snapper and a really good Parrot Fish / Tusk Fish caught by Ash. It is actually Ash’s boat we were on. Ash has a charter business called NT Coastal Fishing Charters, but this wasn’t a charter. Just a few mates out fishing. The name of the boat is “5 O’Clock Somewhere” and it’s just recently undergone a full refit with new (and bigger!) outboards, new electronics and stereo system. And we certainly gave the stereo a flogging on the day. 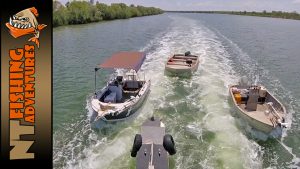 You might also recognize Damon, from Borroloola Houseboats in this video. Damon was in a previous video I did on an Epic McArthur River Houseboat Adventure. Brett from Wiyibi was on the houseboat for that trip too. And so was Ash from NT Coastal Fishing Charters. And also another one of our mate’s, Bullfrog who has appeared in several videos.

Back to North Island and Paradice Bay.

After fishing for most of the afternoon, we quickly dropped back in to Wiyibi Fishing Lodge to see Brett again and say seeya later. Then it was time for the big trip home.

The day finished with sunset, as usual. But in this case, we were all still on the boat heading home carrying-on like gooses.

I had really good fun editing this video. I hope you enjoy.